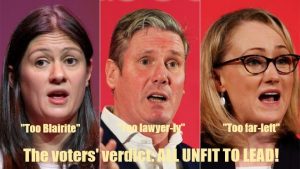 Oh, dear. The UK mainstream media have got themselves in a collective lather over whether Labour leader Keir Starmer should be given his marching orders over Beergate. Who on earth gives a stuff about this?

There is a huge cost of living crisis. Household bills like gas and electricity is going up, tensions are rising in Northern Ireland, the economy is in tatters, and of course, the situation in Ukraine seems too close to home… yet we are told that THIS stuff over Starmer is more important than anything else right now. It’s becoming boring, repetitive and downright tiresome.

Keir Starmer has a lot of things on his plate. He staked his oppostion leader’s role on just attacking prime minister Boris Johnson and the Conservatives without putting forward any policies of his own.

Earlier today, he said that if he was fined for breaking the rules, he would resign. Of course he should go… not for Beergate, but for:

Yes, Starmer should go… and so should her partner-in-crime, deputy leader Angela Rayner who also said she would quit if given a fine too. Then hopefully Labour will finally pick a proper leader who will properly oppose the Conservative government.