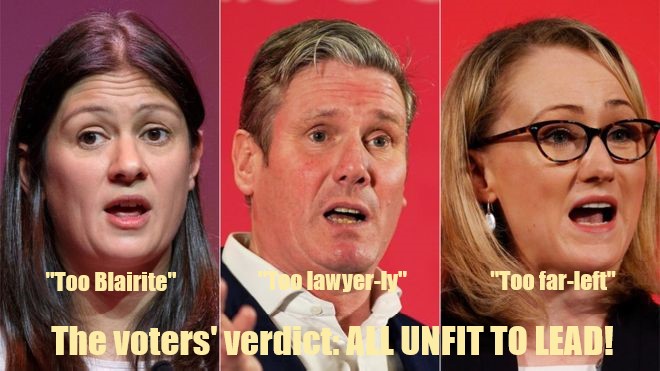 Most commentators who have either written or broadcast endlessly on the coronavirus crisis had thankfully little to say for the fact that the opposition Labour party will soon get a new leader to replace arch leftwinger Jeremy Corbyn after their devastating general election defeat to the Conservatives last December.

Being leader of the party, whether in power or opposition, is a thankless task. It is an organisation which is heavily factionalised and divided. Ever since losing power in 2010, everyone involved from trade unionists to members, from supporters to MPs, have spent endless energy routinely attacking each other. Who in their right mind would want to be a member of this sh*t show?

From the moment Labour members chose Corbyn to be their leader, the party was on a hiding to nothing. His political record, being a leftwinger who was a rebel and never a team player, supported controversial causes. Under his watch, the party had become a hot-bed of anti-semitism, racial discrimination and personal bullying.

Sir Keir Starmer. The clear favourite (in the media’s eyes), and the complete opposite of Corbyn. Seen by moderates as a man who can unite the party. However, as a lawyer, his record as Director of Public Prosecutions could work against him.

Rebecca Long-Bailey. The members’ favourite (not just necessarily leftwingers), the best chance that the party have got to finally elect a female leader. Unfortunately, as a former member of the shadow cabinet, she has been dubbed in the media as the Corbyn continuity candidate, who supported the policies which were completely rejected by the voters at the general election.

Lisa Nandy. The outsider who could yet spring a surprise. She has plenty of support, but she was also an arch critic of Corbyn. As an MP in the north of England, she feels the party needs to win back many of the seats that they lost to the Conservatives.

The contest should have been about learning the lessons of their election defeat and to promote great ideas and policies, but in the end, it typically became one huge bitchfest, in which all of the candidates spent the entire time openly attacking each other. No wonder the electorate looked at them and said, “We don’t like you” back in December.

At this time the party is facing pressures on many fronts, from a highly-publicised investigation into anti-semitism and the fact they are currently being sued in the courts by former members who feel they were wrongfully suspended or expelled.

The one who is elected leader, like Corbyn before, will never get the majority of support of his fellow MPs, and will spend the next five years trying to fend off criticism from both the affiliated trade unions and political commentators. Despite the fact the the present Conservative government’s pandemic strategy continuing to flounder by each passing day, Labour will continue to look in on itself at a very time that the country desperately needs a proper political opposition.