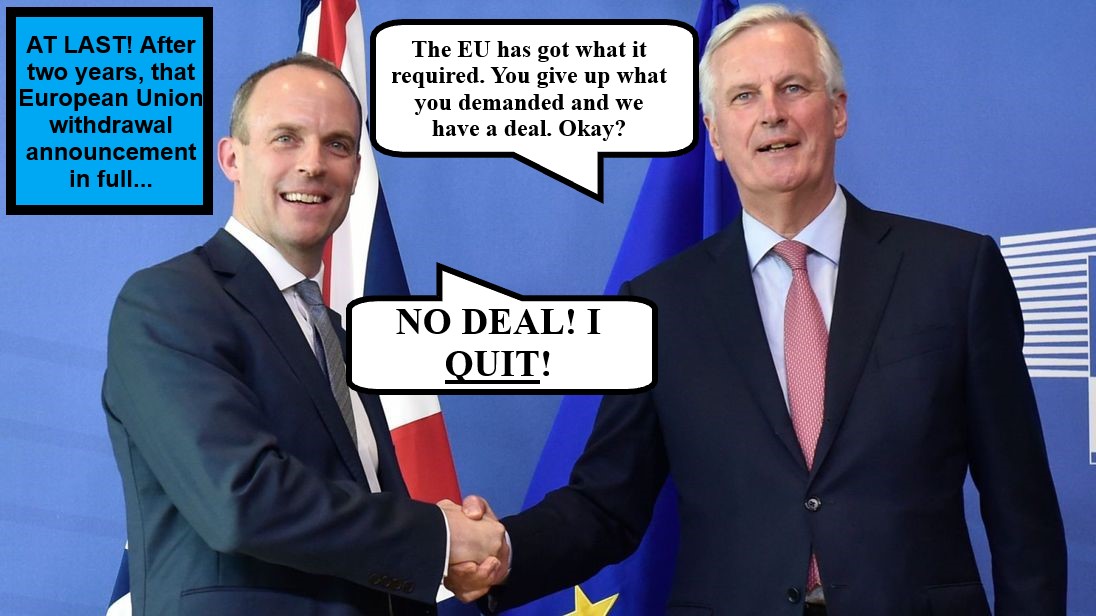 It’s becoming a f**king farce… and beyond a joke.

Our so-called parliament decided not to make a decision on how the United Kingdom leaves the European Union. MPs were asked to vote on eight alternatives to Prime Minister Theresa May’s twice-rejected withdrawal deal… but failed to get agreement on all of them. May announced that she will resign… but only if her original deal is voted through for a third time.

Despite the fact that WE, the people, voted narrowly to leave the EU, our MPs seem to be either unable or unwilling to get their collective act together and do what is in the national interest. There’s now a complete standoff in the Conservatives between the PM and her cabinet, the PM and her brexiteers, the PM and her remainers, and the PM with the rest of parliament.

Meanwhile on the Labour side, party leader Jeremy Corbyn, who’s on public record as more stronger against the EU, has been fighting a rearguard action against the majority of own party members who are remainers, plus many of the so-called heartland voters who wanted to leave.

Put in the other parties, with the ex-Labour (anti-Corbyn) independents who support remaining in the EU but don’t have the numbers, and you got a parliament which MPs have become so set in their ways they would rather die than make any sort of compromise. Why on earth did we elect these f**king morons to make these decisions if they cannot be bothered to put forward a reasonable plan to leave the bloc?

Meanwhile, the EU negotiators must be wondering why we wanted to leave in the first place, being diplomatic about our plight in public, but laughing at us in private. Why should they… or the rest of the world… care what happens to the UK now? Endless media hours have been wasted on this with broadcasters, newspapers, commentators and self-important bloggers talk and write bile after complete bile on this. When will it all end?

The referendum fallout has not only divided parliament, but also the country. People have had enough after 11 years of extreme austerity, which has been pushed through by both Labour and Conservatives, have seen people lose their jobs, living standards decline, more descending into poverty and destitution, an increasing violent crime wave and leading to a neglected public realm which has seen the closure of vital public services. The institutions which once held our society together have been broken beyond repair. Is this the sort of country we want to leave to future generations?

The day before we are due to leave the EU, we still haven’t got an idea over what sort of relationship with the rest of the world would be. Our parliamentarians are a complete disgrace, and have proved that they are simply not fit to either lead or serve the people. The only way to break this childish impasse is for any deal to be approved, then all of the 650 MPs announcing their resignations. Then, a new law should be passed on banning all political parties, and for the people to put forward decent candidates in order to elect a parliament that is representative of all the people of the country.