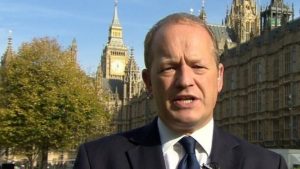 Ever since Jeremy Corbyn was elected leader of the Labour Party in September this year, he has been continually attacked by both MPs and commentators both inside and outside the party.

One person who has been a bigger critic of Corbyn than most is the publicity-seeking MP for Rochdale, Simon Danczuk.

Ever since he was elected as an MP in 2010, Danczuk has spent most of his time attacking both current leader Corbyn for his long-standing left-wing views, and his predecessor, Ed Miliband, for being part of the North London metropolitan elite, claiming that neither of them represent true party supporters  outside of the capital.

He also allegedly writes columns for certain right-leaning newspapers publically attacking his own party for financial gain (he comes from a very long line of centre-left former, current MPs and commentators who have done exactly the same thing).

More recently, Danczuk has been well known for his personal marital problems and his often shameless self-publicity that repeatedly embarass the Labour party. Only days ago, he was criticised by some commentators for ignoring the problems of some of his constituents who were affected by the current floods. All that has led to a front page headline in The Sun over his alleged sexually-explicit mobile phone texts to a teenage girl.

In spite of all this, Labour announced that Danczuk would be suspended pending a full and independent investigation. But why stop there? Corbyn may want due process to take its full course, but in the meantime, it still allows Danczuk every opportunity to attack both the party and the leader both in parliament and in the press.

It is very unfortunate that the good people of Rochdale will have to continue putting up with this situation until local party members and supporters start doing the honourable thing… and deselect him.