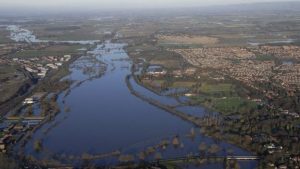 For the last few weeks, parts of Wales, Scotland and northern England have suffered long periods of heavy rainfall leading to localised flooding.

This has understandibly ruined Christmas for many communities and have predictably led to calls from the media and politicians alike for the government to do more to improve defences to protect communities not just currently affected, but across the country as well.

Unfortunately, we have seen the awful spectacle of both government and opposition (mainly Labour) politicians attacking each other over who cutting funding for such upgrades. Prime Minister David Cameron, facing anger from local residents, had claimed that the current government had spent more for them than their previous Labour counterparts.

Perhaps the real blame for this state of affairs is not only of successive national governments for failing to properly fund and invest in such schemes, but also local councils, in their desire to attract people into their towns and villages, recklessly approve planning for the building of homes and factories in areas that could be prone to flooding. Indeed, it may seem a selfish thing to say on my part (my home has never been flooded out), but it seems totally unrealistic to try to construct even bigger defences, which may only protect some towns but make others vulnerable. For many people, such natural events such as storms are what some weather experts say the cause of climate change.