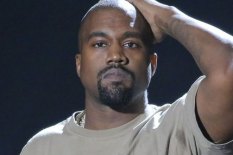 Last night, hip-hop star Kanye West announced at the MTV Video Music Awards that he will run for election of the President of the United States of America in 2020.

Oh dear, it’s bad enough for Americans to put up with the likes of clowns and nut-jobs like the businessman Donald Trump who think they could do a better job than any experienced politician.

West was not the first clown to put himself up to ridicule when running for elected office, and  won’t be the last. Still, at least he has five years to change his mind…..

Current Affairs Media This is Stupid