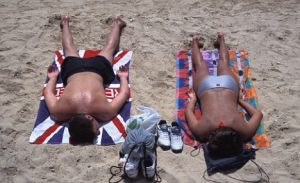 The UK rarely gets any form of sunshine and warmth, so when it arrives, even for a few days, most people would welcome it.

But no… as soon as the current warm spell arrives, the country typically descens into chaos. Many people take the day off work, affecting productivity. Despite the warnings, people simply forget to take water and complain about the heat. On public transport, train tracks have sometimes known to buckle in the sudden heat, so speed restrictions have been put in place, slowing down passenger journeys, the situation made even worse by the lack of air conditioning. It makes me laugh when many people often dress inappropriately for such days. It’s annoying when, in spite of all the more important issues going on in the world, the weather is often front-page news in the papers and on TV. Moan moan moan…..

We should be grateful for the fact that in the UK we have a mixed climate. Yes, it rains a lot, we get some sun, sometimes we have snow and thunderstorms…. but that’s nothing compared to many other parts of the world which often suffer the likes of drought, tornadoes, hurricanes and live under the threat of earthquakes on a regular basis.