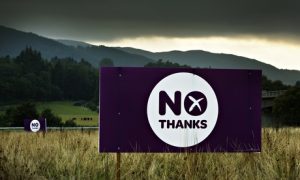 So, the people of Scotland have spoken…..

The three mainstream political parties give a huge collective sigh of relief.

People voted out of fear of the unknown.

Democracy was definitely the loser in this referendum.

Does anybody in Scotland believe that the situation will change? You have to be cynical, but many voters felt influenced by Westminster’s last-moment offer to give Scotland more powers. When the fuss dies down, any so-called plans will be completely forgotten.

Some commentators have argued that the winner in this referendum is Prime Minister David Cameron. They feel that he can now call the shots and deliver changes on his own terms. With so few supporters and just one MP in Scotland, the Conservatives don’t need to rely on their votes to keep their party in office.

Despite his party’s poor performance as part of the current governing coalition, Nick Clegg will not be sacked as party leader by the Lib Dems. The party is more resilliant then critics both inside and outside the party would suggest. He has, to be fair, prevented some of the most controversial policies the Conservatives wanted to put in government. As the party of devolution, their record at local level will keep preesure on their coalition partners on sticking to their commitment to transfering more powers from Westminster.

Many commentators argue that the biggest loser is the Labour Party. Despite dominating Scottish politics for decades, they had failed to excercise their power properly, and when the Scottish National Party overtook them in popular support, they didn’t know what to do. The party on both sides of the border is in terminal crisis. Not only that they face political wilderness in Scotland, party leader Ed Miliband has been criticised for his repeated failure to put forward an alternative vision of what the United Kingdom could be like. Labour are also losing support in England to the likes of the environmentally-aware Green Party, and the anti-European Union, United Kingdom Independence Party. People have fresh memories of the last Labour government, which wasn’t very popular.

Scottish National Party leader Alex Salmond will regard this as a setback. He may have lost this battle, but, in the long term, he may eventually win the war…..

…..and independence will continue to be a viable alternative to the status quo, unless the Westminster establishment put forward real proposals that will give real fiscal and decision-making powers, not just to Scotland, but to the whole of the United Kingdom.