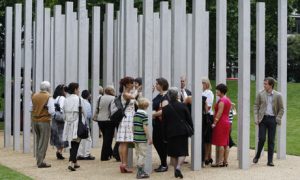 Today is the ninth anniversary of the terror attacks in London which have seen 52 people killed and others injured.

This was a significant part of the city’s recent history, but where was the media coverage? Unlike the 9/11 attacks in the United States, unless you have been affected by those terrible events of that day, there has been very little leading up to the anniversary in UK television, radio, newspapers or elsewhere (unless I may have missed it). Perhaps many of us shamefully want to forget about what happened.

Issues that dominated the news included an inquiry was set up over fresh issues of child abuse. Prime Minister David Cameron is facing problems from many of his own MPs over the European Union in the light of UKIP’s recent success in the polls. On the sporting front, the world’s top cycling race Tour de France will complete the last of the three stages that take place in the UK before crossing the Channel tomorrow.

It is still a scandal that many in the UK still continue to ignore the attacks, and that we still refuse to recognise that the 2003 US-UK invasion of Iraq was one of its direct causes.